On this most recent Patch Tuesday, Microsoft announced the release of a new Windows 11 Update, formally known as Windows 11 22H2. In addition to their plans to release Microsoft 10 22H2 in a month’s time, several aspects and features of the new Windows 11 update have been announced to the public with mixed reactions. Here’s what you should expect from Windows 11 22H2, and how it may affect your server.

Get the Windows 11 22H2 Update Today
While Microsoft reiterates that it will continue to release major updates for Windows 11 in the second half of each new coming year, the company also plans to release regular updates with new features more often. For those of us who are eager to participate in Windows 11 22H2, the update may be available to you now, so long as you’re already using Windows 11 version and your system does not have any safeguard holds.

To get started with the latest version of Windows 11, open your Windows Update Settings (Settings >> Windows Update) and select Check for Updates. You may have access to this version already.

Overall
Overall, Windows 11 is not something to necessarily write home about. It’s a small (and mostly surface) update with a few new tricks, but it’s leaving a lot of Windows users hungry for more. We expect that through several more updates over the next months (or even years), this new update may become increasingly more valuable to Windows users, but for now, it’s leaving a lot to be desired.

WAM v2022.07
Have you downloaded the latest version of WAM? WAM v2022.07 correctly renames the Windows 11 operating system in WSUS via the Rename OS Descriptions Stream.

Learn more about the latest version of WAM.
Learn more about Windows updates, WSUS Maintenance, and how to have the most efficient server possible by visiting AJTek.ca today!

At AJ Tek, our vision is to make IT simple and automated for other IT professionals. Our flagship product is WAM, WSUS Automated Maintenance. This system performs all of the tasks that a WSUS Administrator needs to do to maintain WSUS properly only leaving the approving of updates and reporting to the WSUS Administrator.

Connect with us on Facebook and LinkedIn for additional insights and advice.

You probably already know that backing up your Windows Server Updates Services is crucial. You...

END_OF_DOCUMENT_TOKEN_TO_BE_REPLACED

You probably already know that backing up your Windows Server Update Services is crucial. You want...

END_OF_DOCUMENT_TOKEN_TO_BE_REPLACED

This summer, Microsoft has released a new Unified Update Platform, or UUP, that allows commercial...

END_OF_DOCUMENT_TOKEN_TO_BE_REPLACED

Adam Marshall, president of AJ Tek and creator of WSUS Automated Maintenance © has been honoured...

END_OF_DOCUMENT_TOKEN_TO_BE_REPLACED

In 2015, WAM was launched as a user-friendly and time-saving program to help our customers by...

END_OF_DOCUMENT_TOKEN_TO_BE_REPLACED

Maintaining your WSUS is a necessity in any server, as it ensures your system’s storage is not...

END_OF_DOCUMENT_TOKEN_TO_BE_REPLACED

May The Fourth–Or Should We Say, May The WAM–Be With You!

To celebrate this year’s May the fourth, we here at AJ Tek have been looking into what Star Wars...

END_OF_DOCUMENT_TOKEN_TO_BE_REPLACED

WSUS Maintenance For Your SCCM Environment

While managing WSUS (Windows Server Update Services)--especially when it comes to an SCCM (System... 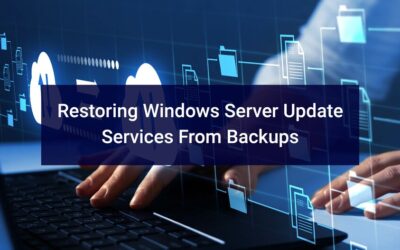 You probably already know that backing up your Windows Server Updates Services is crucial. You want to back up because restores are faster than rebuilding WSUS. Although it’s not difficult to rebuild, it takes valuable time we know you don’t have. Your WSUS... 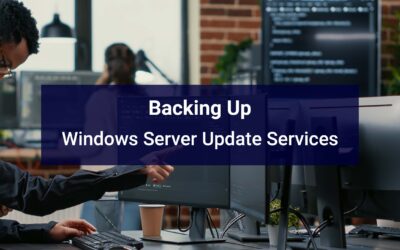 You probably already know that backing up your Windows Server Update Services is crucial. You want to back up because restores are faster than rebuilding WSUS. Although it’s not difficult to rebuild, it takes valuable time we know you don’t have. Your WSUS...